A Behind-the-Scenes Look at Your Fall Protection Equipment

YOU buy and use fall protection harnesses, lanyards, rope grabs, lifelines, retractables, and other equipment every day. Each item is labeled, ensuring that it conforms to ANSI specifications and OSHA regulations. These product certifications give you confidence and peace of mind.

Everything about fall protection is significant. Each year, injuries and deaths from falls are among the highest among reported accidents in U.S. workplaces. OSHA reported 5,504 violations of the general requirements for fall protection from Oct. 1, 2004 to Aug. 30, 2005; only scaffolding and hazard communication ranked higher. 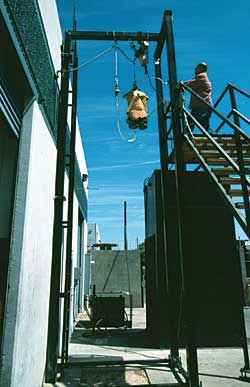 Reliable equipment in the hands of trained personnel is the

solution to this problem. Fall protection manufacturers make every effort to deliver quality equipment. Let’s take a look behind the scenes and at a personal experience.

Lesson Learned  When I was 17, I worked at a wire rope shop. One of my responsibilities was making hundreds and hundreds of slings for a power plant.

They wanted these slings lot tested by having one out of five pull-tested to 150 percent of its safe working load. I thought this was entirely too time consuming. After the pull test, it would leave a kink in the eye. Because the tester was in the back of the shop and no one was watching me, I threw 10 at a time into the pull tester just to kink the eye.
This went on for some time, until one morning when I heard that there were three fatalities over a sling failure. Later in the day, I found out it was one of the slings I had made. How horrible a feeling: I was personally responsible, through carelessness, for the deaths of three people.

The next morning, I found out the whole truth: The sling I had made had not failed because it was improperly made or improperly tested, but because the safe working load cards that the company had at the time were misread. The cards had the safe working load on one side and the tensile strength on the other. The supervisor had misread the card and used the tensile strength as a safe working load. They were using two of the wire slings that I made to lift some rebar. The three men were working nearby when one sling gave way and the rebar slid, piercing all three men and killing two of them instantly. The third lived long enough to bleed to death before they could cut him free.

It was a life-changing experience. After that, every sling that was supposed to be tested was tested.
Test, Test, and Test Again  All manufacturers test their fall protection devices; it’s the law! ANSI Z359.1’s testing section (4.3.3.2, Dynamic Performance Testing) states, “The drop test structure, test torso, test lanyard of 4 foot (1.2 m) length, and quick release mechanism shall be in accordance with 4.1.1, 4.1.3, 4.1.4 and 4.1.6, respectively. The harness shall be put on the test torso and adjusted snugly as though the torso were a person. Attach one end of the test lanyard to the fall arrest attachment element and the other end to the anchorage on the test structure. Harnesses which incorporate integral lanyards must have such lanyards removed prior to the dynamic test. Raise the test torso to a level which will allow a 3.3 foot (1 m) free fall upon release of the test torso. The torso shall be lifted to a point no more than 12 inches (305 mm) horizontally from the anchorage. Release the torso using the quick release mechanism. After the drop, the torso is to remain suspended by the harness for a period of 5 minutes. During the post-fall suspension period, measure the angle at rest. . . . The dynamic test is to be done twice, once ‘feet first’ and once ‘head first.’ A new harness may be used for each test. After each test, evaluate the harness according to 3.2.2.7.”

The drop tower is also essential in the dynamic performance testing of energy-absorbing lanyards. Prior to the drop, the length of the energy absorber is measured while under a tension of 10 pounds. The energy absorber is then attached to the harness on the 220-pound test torso and dropped, allowing for a minimum free fall of 6 feet. The maximum arrest force is recorded. While suspended, the length of the energy absorber is measured and recorded, and the elongation is calculated. The ANSI standard sets forth permissible limits.
These tests are performed on site weekly using quantities as required.

The vertical load tester is used to measure the breaking strength of the hardware components. Samples are tested to destruction. The horizontal tester allows us to perform testing using a system as long as 120 feet. Testing is based on a simulated two-person drop. Readings are relayed by load cell to a PC and viewed in our lab. “Tonzilla,” a pull tester that has a 60-foot test bed and 500,000- pound capacity, is integral to our testing. I believe I designed “Tonzilla” to somehow make up for my lack of responsibility in the process of testing slings 25 years ago. The new machine is equipped with three surveillance cameras inside the test bed that can zoom in close enough to see the actual serial number on a sling, bracket, anchor, or other device being tested, and then pull back to witness the test while a split screen displays the scale of the load cell.

The tests are displayed on two 50-foot flat panel monitors for live viewing and can be digitally recorded. In the near future, we are going to have this system linked to our Web site, enabling inspectors to watch their test in real time from their own laptop.

One of the other advantages of having a camera system is that during our monthly safety seminars, I invite a large crowd of people to learn how wire rope slings and fall protection devices are used, made, and properly inspected. The grand finale is always in the pull tester’s control room. For a more dramatic effect, we placed microphones inside the pull tester and installed surround sound in the control room. A lot of times it’s interesting to watch people anticipating the moment when the cable will snap, by hearing the individual wires start to more rapidly ping closer together until the final, dramatic explosion of 250,000 to 300,000 pounds of energy is released all at once. I think this really gets across the point on how dramatic a failure can be; I hope at least one or two people out of the crowd can take away some information so they won’t make the same mistake that supervisor made many years ago. They will understand the difference between a safe working load and tensile strength.

Death on the Order Desk  As manufacturers, it’s critical that we ask our customer the right questions. I recall a situation many years ago when we sold some 5/8” cable to a customer and later learned it was undersized for the job, resulting in a failure and a fatality. Had we asked more questions at the order desk, the tragedy would not have happened. I have become a fanatic, insisting that our people ask about the customer’s application before completing an order. Most of our customers appreciate this extra thought and time. I believe and trust that you do, too.